I was at Little Creatures a few weekends ago when the Chilli Festival was running to farewell a friend from university who was heading back home. After succeeding in finally finding a parking spot (The Chilli Festival sure seemed to be a hit with the traffic chaos and the lack of parking spots available in Fremantle and unfortunately the time I spent looking for parking was what I was hoping to use to check the festival out) we all settled in for our last meal all together.

The chorizo pizza is a staple of mine and one I have ordered many times before at Little Creatures. This pizza did not dissapoint and had a nice balance between the spicy chorizo and the sauce, base and other toppings.

I was interested in this pizza until we did a quick google to find out that melanzane was in fact eggplant. Those however who liked eggplant polished this pizza off very quickly. I did have a little bit of the lamb and it was nicely cooked and well seasoned. 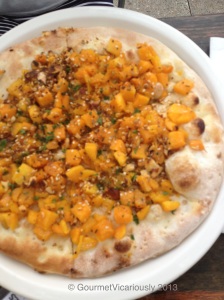 This pizza was surprising as it had a hint of sweetness about it. There was something missing personally with this pizza – one more topping (perhaps some protein or cheese) would have finished it off perfectly. Still an interesting and flavour-filled pizza that I would happily reorder again.

The nachos were personally for me one of the best that I have had when dining at Little Creatures, often I have been left underwhelmed by their nachos. The frites with aioli below is also a staple that must be ordered whenever you go to Little Creatures as they do not disappoint, we even ordered extra aioli and we discovered that it went very well with the crust from the pizzas.

The last dish ordered was the waffles with berry compote, syrup and ice-cream ($14). I unfortunately did not get a photo of the waffle. While we were all a little upset that the apple and rhubarb had been replaced by berries however once the dish had arrived and we’d all had a piece we took those words back – even with the berries the waffles at Little Creatures is to die for!

There was also some of the famous ‘Pipsqueek’ apple cider ($9.80 for a pint). While I had a glass of the 2011 Bellarmine Riesling from Pemberton ($9).

One thought on “Farewell Lunch at Little Creatures, Fremantle”