The heat is still hanging around in Perth we had a few days where it cooled down and we seem to be hovering now in the high 30’s rather than in the 40’s along with a bit less humidity so I can’t complain too much. Still was not the greatest weather for pulling out some wine so instead I oped for lots of water, tea, cider as well as a Rose so that I would still remember what wine looked and tasted like.

I finally put the cider that I bought from The Cidery in Bridgetown when I went down for the Black Wood Valley Wine Show in the fridge. I chose to open a bottle of Spider Cider on New Years Eve after work, which is their normal cider. I adore their ciders as they taste very natural to me, lots of apple, refreshing and a nice dry, crisp finish. For a list of their stocked locations in Perth follow this link. 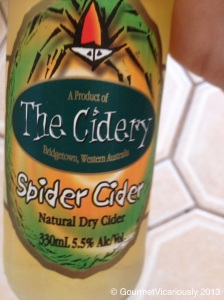 I received for Christmas from a friend a sample pack of teas from T2 and the first one I randomly picked out of the pack was Peppermint Tea. This was quite a refreshing drink, I tried it warn but would love to try this one over some ice as I think it’s a good way to beat the heat this summer! I did also try their English Breakfast, it was nice to smell fresh tea leaves and it’s one of the best cups of English Breakfast I’ve had! I’m a big fan of T2 and wish that their stores were not so tempting! 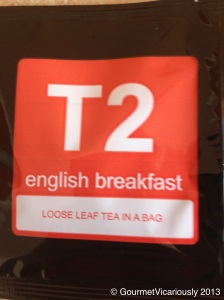 I also went to Little Creatures to catch up with a friend before she leave to travel around Australia for a couple of months. While we were having lunch there I had the opportunity to try Express Wine Maker’s Rosado (2012 vintage, $9 a glass) which I had been eyeing off for a few months now. The aroma was fresh and filled with strawberries, which carried across onto the palate which had a dry and refreshing ending. Not the best dry Rose I’ve had, the palate was a little disappointing.

Last one to sneak in for the week is another cider from The Cidery. I had their Sweet Rosie with dinner last night. This is their sweetest cider and even still it still had a dry and refreshing finish to it. Perfect way to end a return to the warmer days at the end of this week!

Will be off to Melbourne tonight but I have blog posts pre-written and ready to upload so you’ll still see posts from me as usual. Melbourne-related blog posts will start appearing from the following week. Hope everyone has had a good start to the new year!